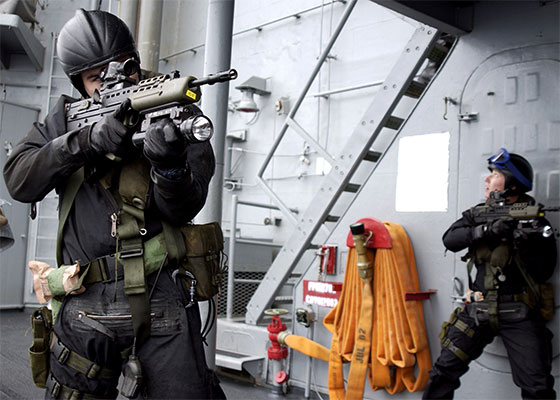 Fleet Protection Group Royal Marines (FPGRM), pictured after boarding a US Navy destroyer during an exercise in 2003. Note the torches fixed to the SA80A2s to assist with searching unlit ship interiors. The FPG Marines are wearing Gecko protective helmets and have field-dressings attached to their webbing. 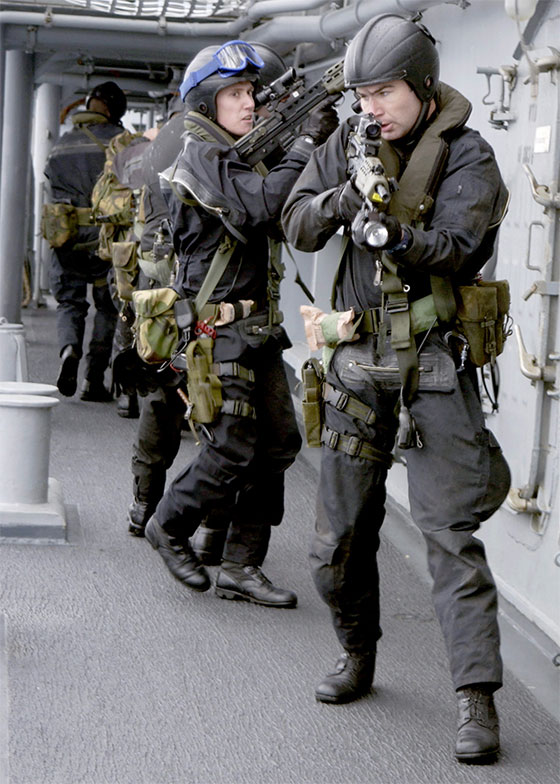 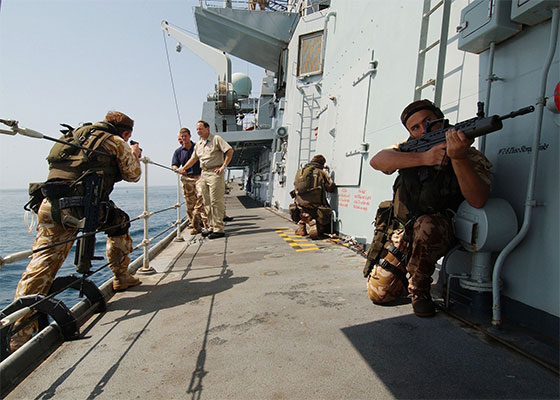 A US Navy Officer observes ship boarding drills performed by Fleet Protection Group Royal Marines (FPGRM), operating from Royal Navy frigate, HMS Somerset. Note the use of iron sights rather than the 4x4 SUSAT optics usually fitted to the Marine's SA80A2 rifles. These sghts are better for the close quarters environment of a ship. 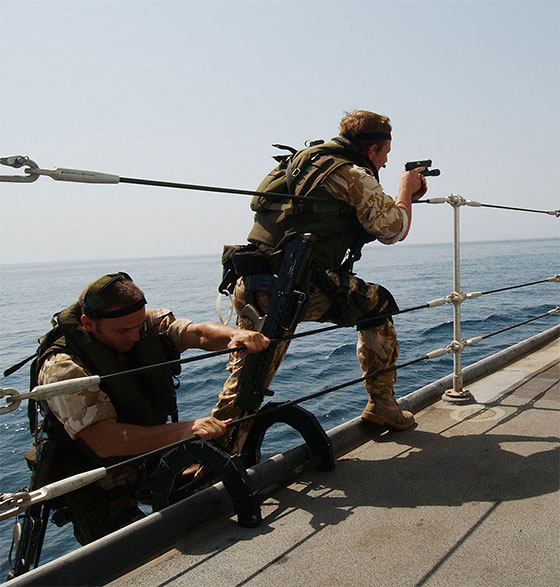 Fleet Protection Group Royal Marines (FPGRM) boarding HMS Somerset during a training exercise. Note the Royal Marine armed with a Browning High Power pistol, his SA80A2 slung at his side - often a necessity when clambering aboard a vessel. 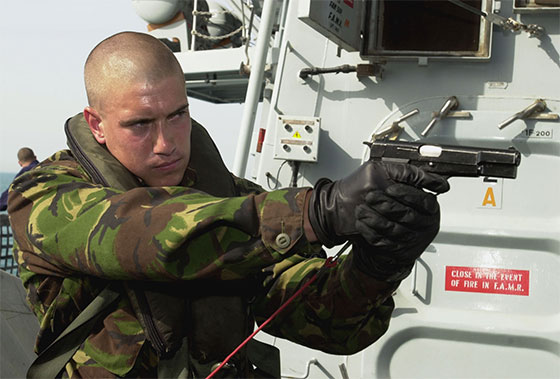 A Royal Marine from O rifle squadron, Fleet Protection Group, takes aim with his Browning High Power 9mm pistol whilst training aboard HMS Portland, a Royal Navy frigate. Note the cord attached to the pistol, ensuring that the weapon cannot be lost. 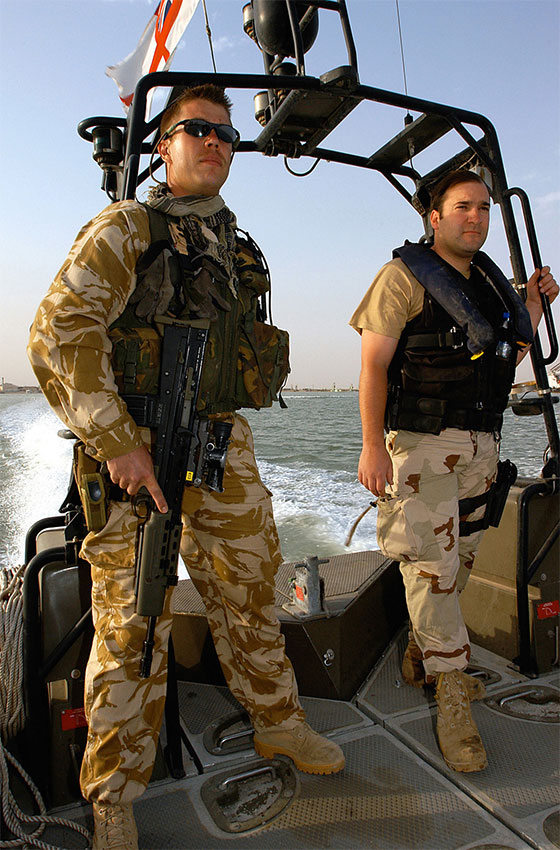 A Royal Marine from the Fleet Protection Group (FPG) pictured next to a member of the US Coast Guard, taking part in a riverine patrol around the Southern Iraq port of Umm Qasr in 2004. Royal Marines boat teams from both the FPG and 539 Assault Squadron have taken turns in patrolling the waterways around Umm Qasr and Basra. 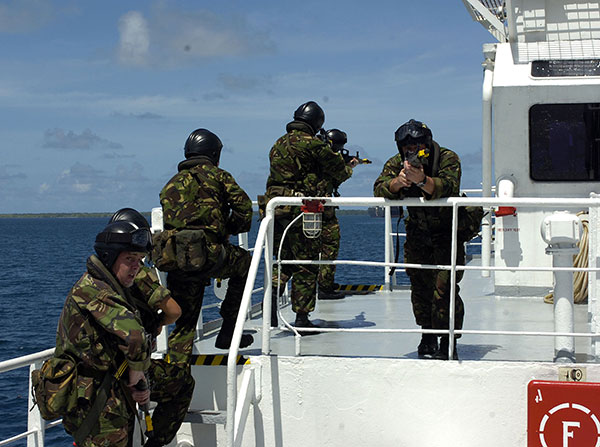 Fleet Protection Group (FPG) Royal Marines move along the deck of a small ship during training in the Indian Ocean. As their role demands, the Marines are wearing Gecko Marine Safety helmets and life jackets.


MOUNTAIN LEADERS
Mountain Leaders are an elite cadre of Royal Marines who are experts in long range reconnaissance, arctic warfare and mountain climbing. As the The Mountain Leader Training Cadre (MLTC), their primary peacetime role is to teach their techniques to other Commando Troops and share their expertise with other military units. During wartime, the Mountain Leaders are able to provide an additional recce capability for 3 Commando Brigade, integrating with the Brigade Reconnaissance Force (BRF) Brigade Patrol Troop to form the Brigade Patrol Group.

Mountain Leaders are not strictly-speaking Special Forces, even though their standards of selection and training are considered by some to be as hard, if not harder, than UKSF units. Mountain Leaders are under the control of 3 Commando Brigade, not UKSF.


MOUNTAIN LEADERS HISTORY
The unit's history can be traced back to the Cliff Assault Wing formed in the 1950s, later to become the Cliff Assault Troop. These 'Cliff Leaders' were tasked with leading the Commando units up cliffs and operating in arctic conditions. The appropriate skills and techniques were developed and perfected and then passed on the rest of the Royal Marines. The Cliff Assault Troop was renamed to the Reconnaissance Leader Troop in 1965 until 1970 when it was renamed again to the Mountain & Arctic Warfare Cadre. The M&AWC helped prepare 3 Commando Brigade for its cold war role, protecting NATO's northern flank. Were war to break out, the M&AWC would provide long range arctic reconnaissance to 3 CDO BDE, operating on foot and on skis.

The Falklands
When Argentina invaded the Falklands in 1982, the M&AWC reconfigured from training to a war footing, raising patrols for 3 Commando Brigade. Following the main amphibious landings on May 21st, 4-man patrols were inserted onto the islands where they carried out recce missions, augmenting the SAS and SBS patrols already operating. Their war was not limited to reconnaissance, however. 10 days after the main landings, the M&AWC engaged in a fierce firefight with Argentine Special Forces at Top Malo House.

The 90s onwards
The Brigade Reconnaissance Force (BRF) was raised in the early nineties to fill the need of a permanent medium recce force for 3 Cdo Bde. Mountain Leader NCOs were used to command these patrols, which eventually became known as the Brigade Patrol Troop. Other MLs remained in the training role, in the form of The Mountain Leader Training Cadre (MLTC).


MOUNTAIN LEADER TRAINING
The Mountain Leaders course is one of the hardest in the British military, as indicated by its 20% pass rate. To gain the Mountain Leaders (ML2) specialty, a Royal Marine must go through an eight-month training course, starting with a week-long selection. An extensive and challenging training regime follows which features:

Once qualified, a Mountain Leader (ML2) will usually be integrated into the Commandos, often into the Reconnaissance Troops of the Command Company (40, 42 or 45 Commando).